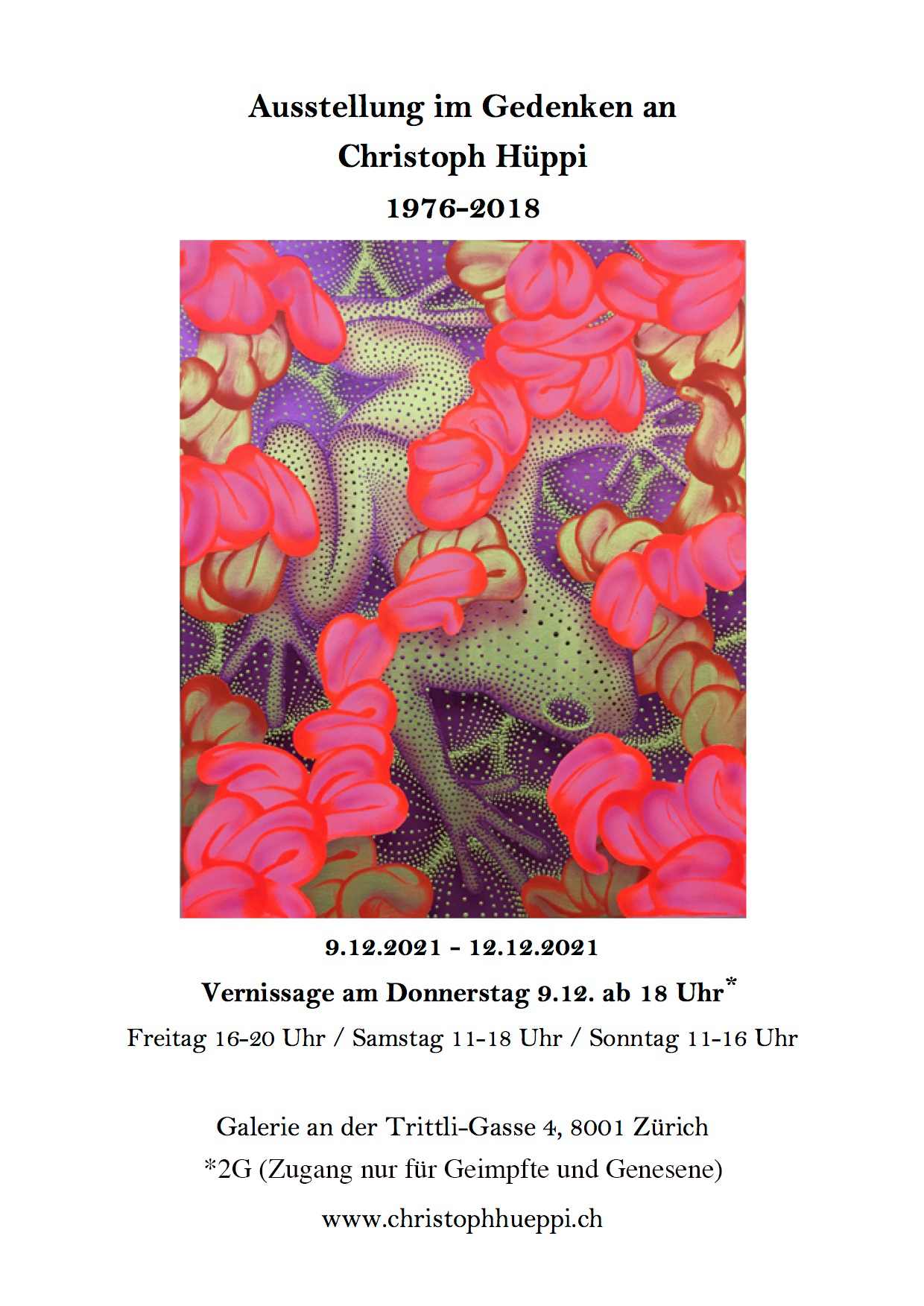 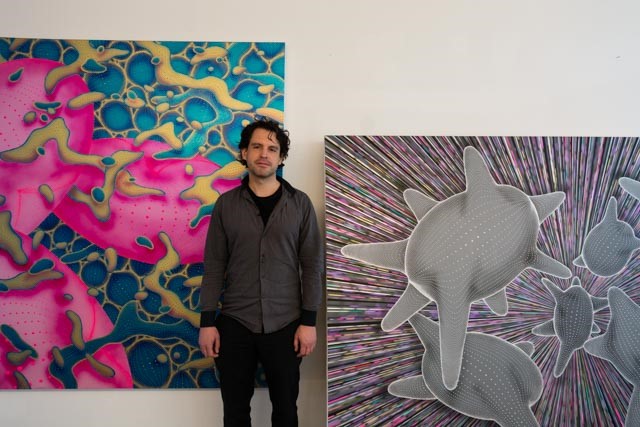 The first thing that strikes one about the paintings of Cristoph Hüppi is their originality - a sort of quirky playfulness with an obsessive edge.
The paintings possess two distinct elements- a meticulously painted background and an array of three-dimensional dots laid down with obsessive precision and inexhaustible patience. The backgrounds are constructed with the help of techniques borrowed from hard-edged abstraction - precisely taped and painted edges, an underlying grid like structure, smooth and flawless gradations of tone and colour, stripes, loops, and curved planes. Over this rational and ordered surface the dots swarm, sometimes in chaotic clusters, sometimes in curving lines. Many of the paintings contain egg like forms whose three dimensionality is solely created by the lines of dots that move over the surface in waves, creating the illusion of form and perspective as they recede from view. The colours used in these paintings are bright and luminous. Often there is the suggestion of light moving over the surface, an effect created by the many subtle changes of tone and colour within the forms. Hüppi uses acrylic for its fast drying properties, its uncomplicated technical procedures (you can overlay colours in a matter of an hour without the danger of cracking in the finished painting) and its high level of colour saturation and luminosity.

Hüppi's work has evolved in an interesting way over the past few years. Earlier paintings tend to be more literal. The swarms are composed of ant-like forms that flood in dark waves over realistically painted elements (stylised ant or termite mounds). In one large painting these mounds stand alone. Hüppi explains that this particular image evolved into its final form by accident - a fluid mix of paint and water seeped down the canvas and suggested the subject. Talk of precision, hard edges and grids might lead one to believe that his approach is predominantly cerebral - a result of careful forethought and planning. This is not so, as the above incident with the termite mounds illustrates. The making of these works is a matter of improvisation. When he speaks of this Hüppi uses words like accident, confusion, and chaos, to describe the initial stages of a process that might span two or more weeks of concentrated effort (Hüppi often puts in a 10 hour working day). After many changes of tone, colour and composition, the piece takes shape. Hüppi uses an assortment of conventional, and unconventional, techniques to achieve his ends. In one painting, for instance, he used his fingers to create a background and then spent innumerable hours taping off the in-between shapes to create hard-edged negative spaces. This combination of two conventionally opposing ways of working - improvisation and meticulous hard-edged painting - is always risky. Sometimes, after weeks of concerted effort, a piece just won't come together and has to be abandoned.

What is true of individual paintings is also true of the overall series - the work evolves in largely unforeseen directions as the result of a process of improvisation spanning months and, indeed, years. The ants of earlier paintings have evolved from swarms into armies of regimented dots, which march like determined invaders over stylised abstract backgrounds. One cannot but admire the backgrounds for their beauty, precision, and visual richness, but it is the dots that steal the show. Hüppi uses squeegee bottles to lay down these dots, which, on closer examination, tum out to be small perfectly formed three dimensional cones, which rise from the surface in long, beautifully articulate lines of brail. They swarm over the painted surfaces like living things and seem to possess a collective intelligence of their own, along with an unpredictable wilfulness. They go about their business oblivious to the spectator and intent on their own purpose. At times, especially when the clusters of dots seem to swell in numbers, the paintings hint at something more sinister- outrageous excess on the part of nature that might be dangerous.

On the whole, however, the paintings remain playful and unthreatening - all this writhing movement can be neatly contained within the confines of the canvas. The underlying sense of order never gives way to the chaotic swarm. The fact that the dots possess sculptural form and are not illusory creations of the brush gives to the work the air of playful quirkiness that dispels any sense of foreboding. This surprising and ingenious solution to the problem of depiction is the mark of an original intelligence that has not locked itself into a (so called) adult sense of what is possible but is in possession of a playful and anarchic disregard for rules and formulae. The work as a whole, indeed, can be seen as a visual poem in praise of an anarchic opposition to the claustrophobic forms of social convention that stifle naturally evolved human impulses.

These painting are rich not only at a surface level but also for the wealth of ideas they succeed in evoking-ideas about order and chaos, restraint and excess, the man-made and the organic, the revolutionary mob and the forces of social order. Most pertinently they evoke the play of the mind itself as it creates and destroys, on the surface of the canvas and in the midst of life. 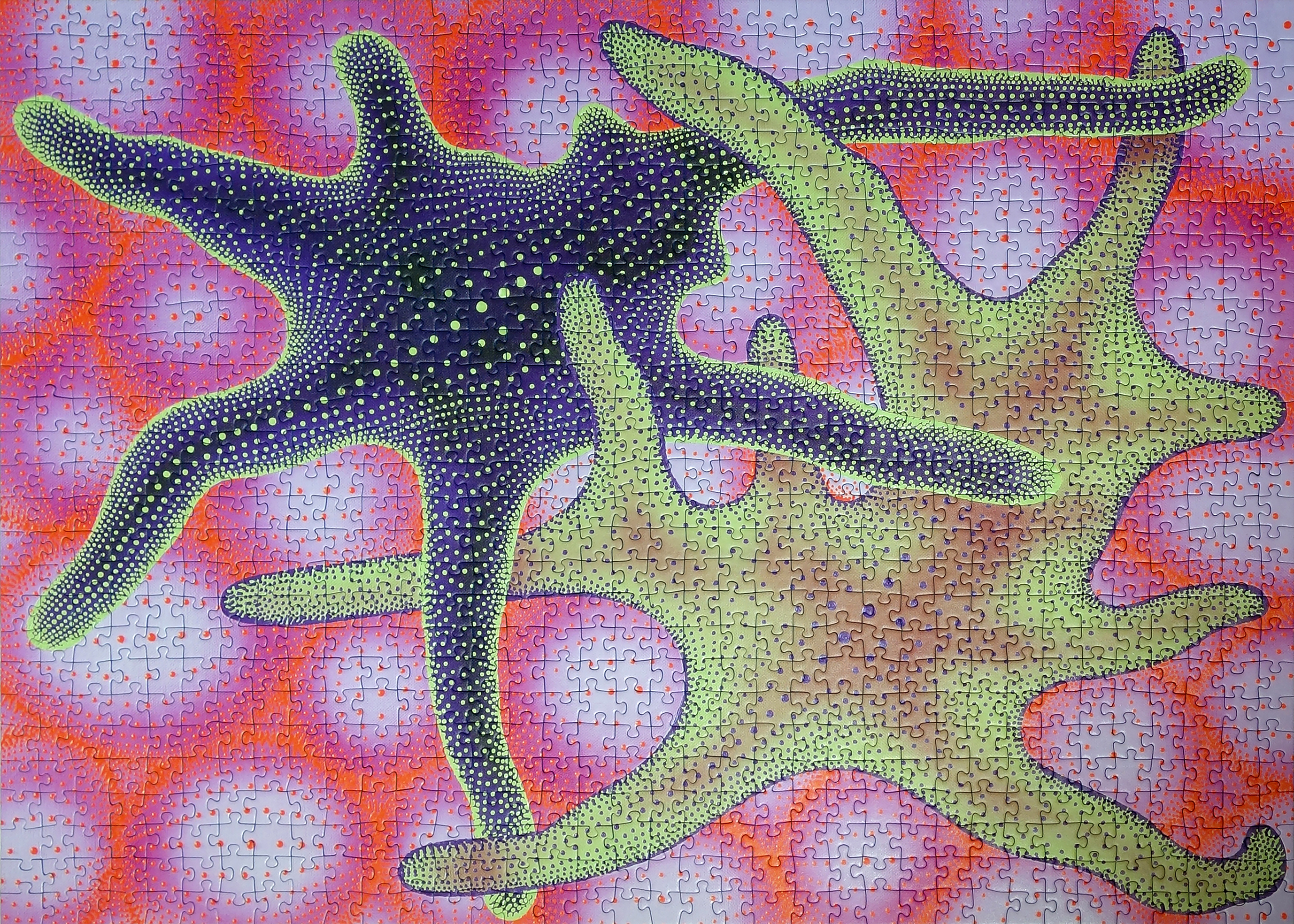